Rise of the Resistance Review

Wake-up. Amount of sleep: five hours. Excitement level: 100%. Time: 6:15 a.m. My clothes are strategically laid out from last night. I dress. Buzz Lightyear t-shirt and shorts. Temperature: 82 degrees. Blue magic band? Check. Hopper ticket from 1996? Check. iPhone and Disney app? Check. It is too early to take a bus from Pop Century. My fiancé already planned for this. We order a Lyft.

Six-forty a.m. The sun is up but still just peeking. The car rolls into the park. Our first line of the day is exchanging our relic ticket for a modern pass. It feels criminal. Ticket price in 1996: $20. Pass price today: $160. The cast member that helps us is not suspicious. I feel suspicious. A few strokes at the keyboard and tap of my magic band later I have my admission. Return on investment: over 600%.

Seven a.m. The park opens. Lines are long. The peak of our excitement is met with the slowness of our task. Five minutes; the line moves a little. Ten minutes; we keep walking. Fifteen minutes; we are finally in. The rides are not yet open. We head over to our next line: Toy Story land. Big crowds, big breaths, we wait.

The line is not for the ride. Instead Disney setup a virtual queue in its app. We have to watch the clock. Count down to 8 a.m. I stare at my Apple Watch. Sixty-seconds to eight. Heart rate: 100 beats per minute. Fifteen seconds to eight: we get ready. The app is open. Five seconds: my fiancé’s finger sits above the virtual button. Zero seconds: nothing changes. She clicks virtual buttons. Nothing. The app is stuck. She kills it. Thirty-seconds past eight: she reloads it and her face lights up. The button is there. She presses it and watches. We are in. Our boarding group is sixty-three, one of the last guaranteed boarding groups of the day.

We are excited and relieved. However, we now get to spend the day waiting. The app shows us what boarding groups are being called. It moves slowly. The ride is glitchy so even a guaranteed boarding group could mean returning tomorrow. It could throw-off our plans. The best way to deal with suspense is to ignore it. It grapples you but you have to pretend it is not there. Afternoon hits and the line speeds up. At 2:40 p.m. we get the notification: we can now board.

Should I Read Spoilers?

I chose to avoid spoilers before riding Rise of the Resistance. I am glad I did. I did not have a long time to wait before riding the ride. The ride is structured in a way that the element of surprise adds to the experience. However knowing what will happen does not rob you of all your joy. If you love Star Wars and Disney and find joy in surprise, then stop reading here. Come back later. Otherwise come along for the rest of the journey below. 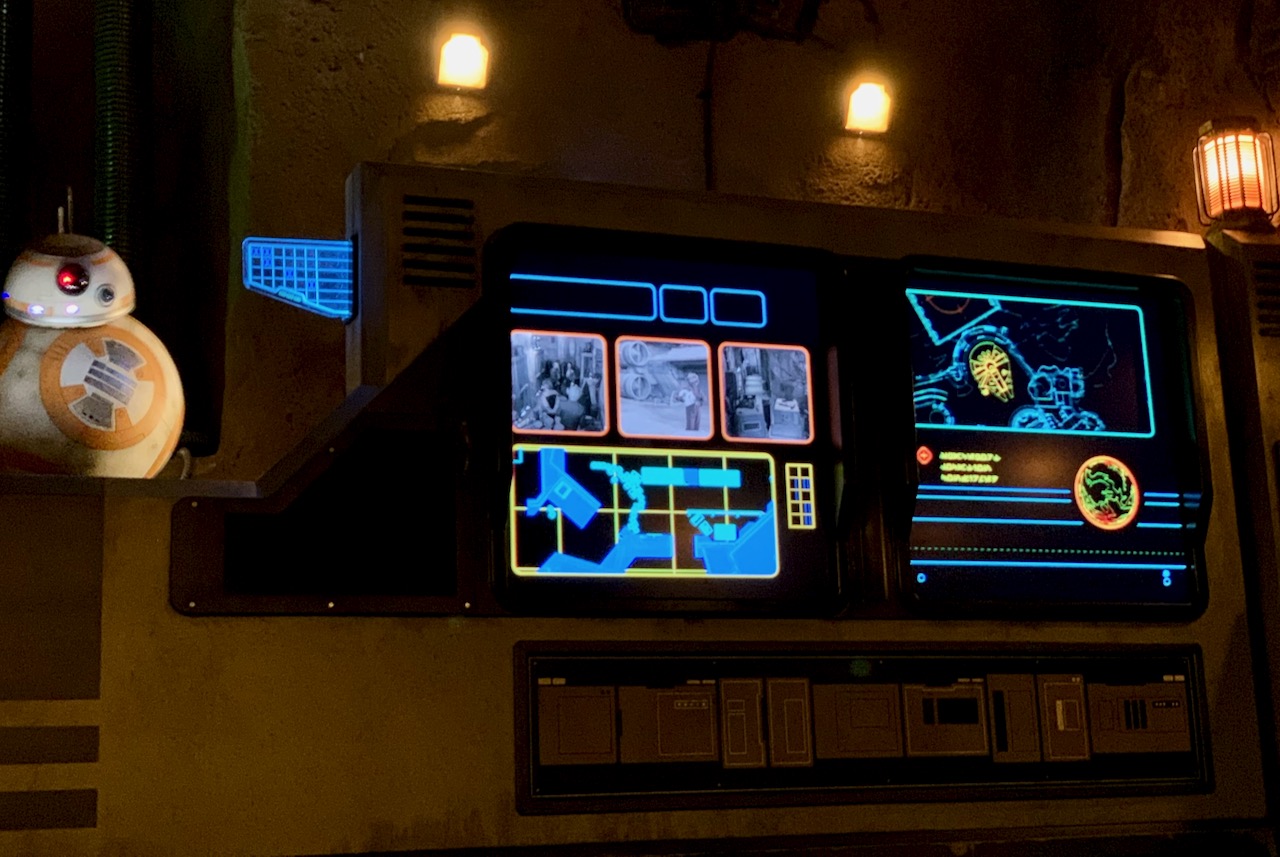 Have you ever been in a play? The kind with three acts? What role did you have? Were you nervous you would forget your part? Can you improvise? Can you let your mind go into another world? Can you be someone else for a moment? This ride asks you to believe you are in the resistance. Let it believe.

The environment is real. BB-8 appears. We are ready to be briefed. Suddenly light projects next to him. What is happening? This looks familiar, but foreign. Rey materializes. Rey glows. They can do that? I have seen holograms but never this way. Crisp, clear, and lifelike. She briefs us on our mission. The hologram lets my mind suspend disbelief. I am going on the mission. The mission is real.

We walk onto our transport ship. This is it. This is the mission. Right? We hold onto railings. We can see our pilot. It is a ride through space. The transport shifts and turns while we stand. We see action outside our windows. Things stop going well. We are in a tractor beam. Our ship is being pulled into a Star Destroyer. This is not good. Why? End act one.

The ship doors open. Enter a First Order officer. We are prisoners. I glimpse beyond the officer. It is a Star Destroyer. I can see space. I see a battalion of stormtroopers. It is only a ride. A fantasy. I still feel captured. No signs of the outside world exist. I am on the Star Destroyer. We are escorted by the officer to an interrogation queue.

Not how I expect. Behind us we see light as members of the Resistance cut through the wall. Did they really do that? It looks like it. How did they do that? We are ushered into the escape vehicle. Begin act three. This is the ride. I finally get it. We are going to escape in our droid piloted vehicle.

Have you been in a laser battle? The kind with bolts instead of beams? Have you seen a lightsaber cut through a ceiling? Have you looked up at an AT-AT? The battle is happening around you. You are trying to escape. Relax. Can you? That blaster fire was a bit close. Take it in. Wait, is that Finn? Look at the world around you and ask yourself: what is reality?

Time to enter the escape pod. The end is near. Time to disconnect from the ship. The pod launches. We are free falling in space. I can see it outside the windows. I feel the pod jolt. We are going down. Drop. Crash. End act three.

The experience of Rise of the Resistance is unmatched. Disney Imagineers pushed themselves to new levels to create an attraction that immerses you in the world of Star Wars. While the technologies used to make that happen are impressive, they take a back seat to the experience of them playing in concert. It is worth going to Disney World just to experience this thing that is more than a ride.