Gold Rush - Upgrading to iOS7 and the iPhone 5s

A few days ago I upgraded my iPhone 4s to iOS 7. It took a while to load and after going through the process the phone was slow for an hour or two.1 My first thought after it loaded was that the GUI was both familiar and unfamiliar. All the icons were present but shined with a different polish. A click on an icon or folder initiated a zoom-in action and clicking the home button caused a zoom-out animation. It reminded me of Prezi. Between that and the parallax effect the interface had a pleasant sense of depth.

The only things I did not like were the use of text as buttons and the rearrangement of familiar elements like the password screen. I have used a passcode on my device for a long time and the new layout of the passcode screen rendered my muscle memory for quickly entering my passcode useless. I slowly got used to it but since the passcode entry took over the whole display instead of half of it, it felt like it still took longer to enter the code. I could not do it using my thumb while holding the device in my left hand the way I was used to. Looking for the block of text that confirmed the entry of the code was more difficult than the clearly delineated button in the old OS.

In spite of these pitfalls I think most iPhone 4s users have much to be happy about with the upgrade. Things like control center with a built-in flashlight application make the phone easier to use. With new features and a Siri that seems more repsonsive than ever an iOS 7 upgrade will make the iPhone 4s feel fresh and should keep it going for another year or two. If you want to save some money or are not elgible for an upgrade I do not think selling your old 4s for a 5c or 5s is worth it. If you have a regular 4 you probably should upgrade to a 5c or 5s.

It is a quirk of the United States mobile market that every two years you are elgible to upgrade to a new phone at a cut-throat price. Carriers have been aggressively moving to implement plans that allow you to add a charge to your monthly bill that lets you upgrade your phone annually, but they do not appear to do the converse: reduce your monthly bill in exchange for not buying an upgrade. Instead you merely agree to stay with the carrier for two more years. Unless you plan on switching carriers, this makes buying a subsidized phone upgrade a no-brainer. So yesterday, my iPhone 4s being nearly two years old, I decided to stand in line and pick-up a 5s. 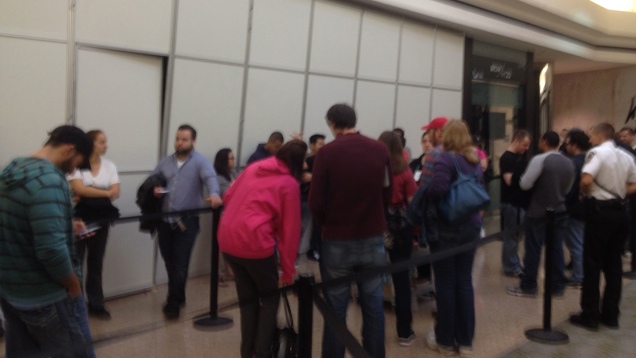 I arrived at Westfarms mall in West Hartford around 7 a.m. for the 8 a.m. opening of the Apple store. When I got there the line was already 75-100 people deep and snaked behind J.Crew. An Apple Store employee told me as I was going to enter the line that they were already out of the gold iPhones. This was not a problem for me because I wanted a space grey one, but I was surprised at how many people turned around and left after hearing that. The line was remarkably calm and orderly, maybe a symptom of the early morning. One employee tried to get the line fired up but the energy did not propogate. While we waited Apple store employees asked us what phone we wanted and handed out tickets for their inventory. I was nervous when the ticketing ended a few people in front of me, but I was assured they still had phones and more tickets would be coming soon. About half an hour later I got mine.2 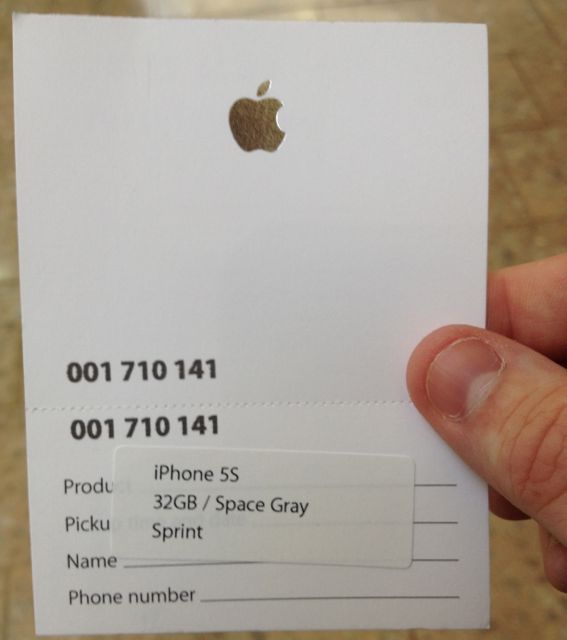 While waiting I started to joke that after spending $300 on a phone the least they could do was buy us a cup of coffee. Well my prayers were answered when I saw a cart roll down the line loaded with Starbucks coffee and pasteries. That got the line to perk up. At around 8 a.m. it finally started to move in an orderly fashion. The keeper of the front of the line would send each person to an Apple store employee as they became available.

I had trouble purchasing my iPhone because Apple required the main account holder to designate me as an authorized user to make the purchase. Fortunately the Apple employee that worked with me was understanding and patient as we had to work around this snag. I was impressed to see that Apple had representatives from all the major cell phone carriers in the store, and my father worked with a Sprint representative that stayed on the line as we tried to add me to the system. Unfortunately in spite of Sprint adding me, the update would not propogate to Apple’s servers and I was unable to complete my purchase. I was really worried since the inventory looked like it would sell out and online orders were backed up by a week or so. However the Apple store offered to hold the phone in reserve for when I returned.

Later that night I returned to the store to complete my purchase. Apple offered a trade-in program through a company called Brightstar for the old phone. I was able to get $168 in Apple store credit which was enough to offset the cost of buying Applecare and some of the phone. The Apple store employee checked the phone for damage and had me sign a form on their sales device before having me erase the phone and taking it away. Then I hit the same snag as before: system had not propogated my authorization to Apple’s system. Fortunately the store was able to work with Sprint to get verbal confirmation from them.3

After the device was purchased they offered to stay and work with me to get it setup. I accepted the offer primarily to make sure the phone would connect to the network. The Apple store specialist stayed and worked with me through the whole process. Unfortunately the WiFi connection in the Westfarms Apple Store is poor and so downloading my backup from the network was slow and I had to cancel that portion until I got home. As usual restoring 32GB of data and getting all the apps installed takes a few hours and rains battery but after it finished my phone had everything from my 4s.

I did not use the iPhone 5 so the 5s has many features that are new to me but not the rest of the world. The longer screen is nice for vertical reading and watching widescreen videos. However going into landscape mode to write a text looks awkward and wasteful. The phone itself feels zippier. I think this is due to the increased smoothness of handling some of the iOS 7 animations like scrolling through Safari tabs and multitasking windows. Webpages seem to render more quickly in Safari and apps load more quickly. The phone itself just has a general feeling of more responsiveness.4 The switch to the lightning connector from the dock connector has rendered all my old accessories useless without adapters. However the new connector does feel easier to use. I often had trouble with the pins on the dock connector bending; the lightning connector does not have this issue. Finally the included earpods seem vastly superior to the old earbuds apple used to include. The sound is richer and less empty than the old earbuds. However it is a bit bass heavy and I still prefer my Bose earbuds.

Battery life and cell network reception appear to have improved over the 4s. I can leave the phone overnight and the status of the battery will seem practically unchanged. This is probably due to some of the new iOS 7 power management features. I now can sometimes get three to four bars of reception in my room where I previously was getting one or two. Unfortunately Sprint has not deployed LTE in Connecticut yet so I have not been able to take advantage of the increased speeds and battery life of that network.

The two other biggest improvements to the phone are the upgrade to the camera and the inclusion of a fingerprint sensor. The camera quality is a noticable upgrade from the iPhone 4s. You can see the improvement in general quality by using both the front and back cameras. The software based image stabilization seems to work well and the burst mode on the 5s is significantly faster compared to the 4s. My only complaint is the lack of optical zoom. I presume this is a compromise to keep the unit small. The fingerprint sensor is a bigger improvement than I expected. It unlocks the phone significantly faster than the passcode and seems to register my print about 85% of the time. Sometimes I unlock the phone without intending to if I do not remove my finger fast enough.

The physical form factor of the device is also a big improvement. It is thin enough that it practically disappears in my pocket. The 4s seems bulky in comparison. The back is now mostly metal instead of glass. I presume this may make it more scratch resistant than the 4s and may better dissipate heat. Apple also seems to have made improvements to the oleophobic properties of its screen. I see less smudging and oils adhere to the device than the 4s. Apple is famously secrative about its suppliers but its generally known that Corning, the makers of Gorilla Glass, supplies their screens. For this reason getting a screen protector is both not necessary and somewhat counterproductive.

The iPhone 5s is a solid upgrade for 4s users. The improvements in the speed, battery, form factor, and the camera make it worth it. The TouchID sensor creates a much better user experience for people that previously used passcodes, and non-passcode using people that want the additional security. If you do not have a subsidy it is not worth the price, but if you have a subsidy and trade-in an old 4s it becomes rather affordable and even casual smartphone users will appreciate the improvements.