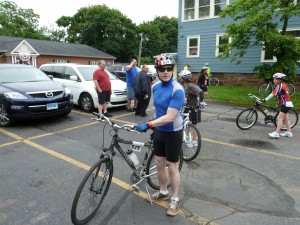 This morning I participated in the American Diabetes Association Tour de Cure in North Haven. My dad has been doing this ride every year for many years now and he asked me to join him this time. Within one week I hustled to get the minimum number of donations. My friends were more generous than I imagined so it was not terribly difficult. Between law school and other commitments I had not been riding regularly so I was a little concerned that the course would be difficult. The weather was not optimal at around sixty degrees with the possibility of rain. So I decided to bring my hybrid instead of my road bike and rode the 25K course with my father.

As I sat on my saddle at the start line the clouds kept things fairly dark overhead. The wind was cool and crisp across my skin. I sort of regretted not bringing my cool weather gear. I was struck by the variety of riders. Some had full kits and expensive road bicycles while others were wearing street clothes and riding mountain bikes. The announcer came on the speaker system and gave-us our final instructions before a rendition of the national anthem. Then we were free to go! After about ten minutes my body warmed itself up. We rode through a mostly residential area. Lots of trees and some older houses decorated the countryside as we zipped across the pavement. The only tough part was a steep hill leading up to the rest stop at the midway point. Many riders chose to dismount and walk up the hill. Dad and I downshifted and kept pedaling.

The cool weather kept the sweat and fatigue that normally accompanies this kind of activity at bay. I almost felt underworked. However I was more than hungry at the end and excited that they provided us with free sandwiches and strawberries. I enjoyed it so much that next year I hope to try the 50K or even 100K if I’m feeling ambitious.